Stop the amputations - Type 2 diabetes cured by diet alone but is this revolutionary?

Tackling obesity head on can REVERSE type 2 diabetes and help Stop the amputations.

Obesity and type 2 diabetes are in the news again.
This time it is another "revelation" that type 2 diabetes can be
reversed through weight loss, as described in the BMJ:

News on the obesity epidemic currently fueling record levels of amputations adds to the urgency for an effective method of treating obesity related type 2 diabetes (Telegraph  29/09/17):

"Britain’s obesity epidemic is fuelling devastating numbers of amputations - almost all of which could have been prevented, experts have warned. Official figures show the number of cases have reached an all-time-high, with  more than 8,500 procedures carried out last year as a result of diabetes.  Nine in ten cases of the condition are type 2, which is linked to obesity and inactivity.  Official figures from Public Health England show 23 amputations are carried out every day, with a 16 per cent rise in interventions between 2013 and 2016, compared with the previous three years…..
People with diabetes have an increased risk of foot ulcers, which can deteriorate
quickly."


What have these new studies found?


The Counterpoint study was the first of these studies into the effect of weight loss on type 2 diabetes. Phase 1 of the Counterpoint study found that in the 40% of individuals who responded to their Very Low Calorie Diet formula (VLCD),  the type 2 diabetes was forced into remission lasting for at least 6 months. The resulting improvement in insulin secretion was seen without the presence of any diabetic medication. Insulin sensitivity was also seen to be improved.
Phase 2 of the study involved a controlled weight maintenance programme which was shown to be successful in preventing weight gain after the phase 1 weight loss using a VLCD.

The Counterbalance study demonstrated the long term remission of type 2 diabetes, of up to 10 years, so long as the weight lost through a VLCD was maintained.

It should be noted that in these studies, the use of VLCD formula foods allowed for sustained, comfortable weight loss, with the authors stating any similar VLCD formula food would give similar results:

Although Optifast was used in the study, this is not readily available in the UK. An alternative liquid food supplement of similar calorific content is equally suitable.

There is no excuse for continuing the appalling number of amputations. The Lipotrim VLCD is available in over 2000 pharmacies and medical practices and has been for more than 30 years. Effectively treating type 2 diabetes in the UK must become standard now.

The Newcastle work is valuable research into the positive effect very low calorie diets (VLCDs) have on weight loss and especially type 2 diabetes and will add to the ever increasing Lipotrim data we have been producing.

The research into type 2 diabetes and weight loss using VLCDs at Newcastle is now continuing through a very large donation made to Diabetes UK. The study is called DiRECT (DIabetes REmission Clinical Trial) and is questioning whether type 2 diabetes can be routinely reversed in Primary Care and whether these interventions are better than conventional treatment.

We all eagerly await the DiRECT study results.

These "new" revelations could, and should, turn the medical world upside down. Type 2 diabetes could virtually be confined to the history books.


Why is this news neither new nor revolutionary?

The effect of weight loss on type 2 diabetes is already in the history books!
We should not wait for it any longer. 150 years is enough!

The issue is that this is not new news and no-one in the 21st century has just "discovered" that weight loss can reverse type 2 diabetes. 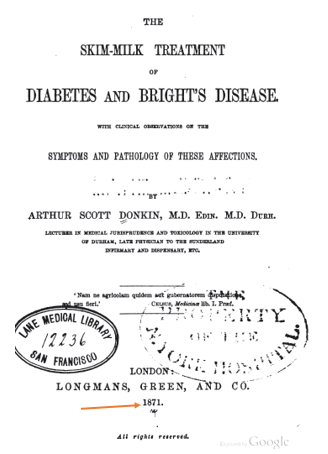 "The skim-milk treatment of Diabetes and Bright's disease" by Arthur Scott Donkin, first published way back in 1871, appears to be visionary. This excellent publication details much of the "new" concepts included in the Counterpoint and Counterbalance studies.

When explaining the results taken from his diabetic subjects in the 1800s, using the Skim-milk treatment, Donkin found that he had:


This treatment was a crude form of the modern day VLCDs such as that used in the two modern day studies into diabetes and weight loss, and it too was forcing diabetic remission. The book goes on to talk about phase 2, as in the Counterpoint study, where food is reintroduced carefully to help maintain weight long term. It says:

"After complete recovery from diabetes, a strict regimen, excluding vegetable substances containing starch and sugar, must be adhered to for a lengthened period, the exact limit of which is impossible to determine, in consequence of the strong tendency which these substances have to excite a return of the disease........With such persons, therefore, a cure is purely conditional"


Professor Donkin had already demonstrated in 1871 that diabetes was able to be forced into remission by controlled weight loss methods, similar to modern day VLCDs such as Lipotrim, and those patients being then able to remain in remission so long as the weight loss is maintained.

What do we need to take away from these new vs old revelations?

This is a story with a happy ending, or so we at Lipotrim hope. It is fair to say that we should all hope that these studies into the remission of type 2 diabetes, old and new, end up as a fully recognised treatment option within every healthcare system across the world. Our ever increasing world population is suffering from type 2 diabetes  and yet here is a small sample of some of the research, prior to the Newcastle work, that is currently being ignored.

There are more, but the list below should make part of the point.  The Newcastle studies just add to a long list, but they have one very important advantage over everything that has come before. Newcastle researchers are using a product that is currently owned by Nestle.  Nestle knows how to make people, press and authorities aware of their products and has the resources required to counter the clout of the drug companies who have worked hard to keep the use of drug in the forefront of medical approaches.  This despite the fact that no drug puts diabetes type 2 into remission.

The other important point is that Lipotrim, which recognises the exciting work of Professor Donkin in 1871, is based upon enriched skimmed milk, and has been in widespread UK use for more than 30 years under the exclusive monitoring of healthcare professionals.  Several accounts of its value in diabetes have been published independently of Lipotrim by hospital diabetic specialists over the years.
Perhaps the Nestle clout can finally, after 146 years, help the NHS save over a million pounds an hour “treating” a disease that can be effectively put into remission in a matter of days.  Weight loss using Lipotrim works rapidly. Let the world know.

Why it is wrong to label obesity as lazy and people fat shamed?

Obesity can be attributed to many things, from metabolism to hormones but the true underlying issue is our basic human instinct to eat. No l...